Here we are once again. June is over so let’s do a quick wrap up of everything we’ve been doing here. It’s definitely been another busy month, but what else would you expect from us? Obviously, we know July will be no different so checkout what we were up to in June real quick before July passes us by!

Starting out we released our latest theme, On Topic. One of my personal favorites, it was designed and built in house! We featured a couple of collaborative posts in an effort to share more awesome WordPress & WooThemes related products. First up we had ManageWP making it easy to manage your site, followed by Wysija who put a little Woo in their newsletter plugin, and finally from Tweaky.com who showed us how to create custom reports for your content & social media marketing.

Outside of that we posted some free ecommerce icons, launched our themes on CreativeMarket, ran a quick Facebook contest, showed you how we use version control on our own site, added support for Twitter’s new API into WooDojo, released the points & rewards extension, celebrated a huge milestone of 1 million WooCommerce downloads, had another roundup of free WooCommerce extensions, and finally had a classic WooCommerce extension drop. Whew, let’s take a moment now to take a deep breath and see how we did supporting all of this!

I’ve added the difference between May’s to these numbers, and started showing the breakdowns between our 3 biggest channels as well. Hopefully that helps you see some actual differences now. We’ve received more tickets this month, and consequently have had more touches as well. Even though we peaked over 40+ hours now in our average response time, it was only a 1.5 hours increase with the increase in touches and tickets. If you look at the chart above, blue is new tickets and green is solved tickets. We really modified some of our workflows near the last week of June and you can see that we are keeping up with new tickets much better now as each week goes on. Something we plan to keep up with! All in all, we did make improvements in getting more tickets answered within 24 hours and increase our satisfaction rating.

Very happy to be back closer to 90% on our satisfaction ratings, even with tackling more tickets than last month. We may have been slightly slower, but we made big leaps in making sure satisfaction was better!

I like sharing these parts of our metrics to show you a little bit of what we’re working on to meet the needs represented here. We’ve mentioned before that we’re working on a proper way to update your themes, just like our plugins do. Also in reply to our top searches we’ve got big improvements coming to WooSlider, we mentioned above how we fixed our Twitter plugin in WooDojo, and we just released an update to Canvas. Particularly speaking to the last top article, there are improvements in using Hooks and Filters in Canvas. 🙂

I wanted to have a little section here to talk about a conference a few of us attended called Open Help. It was a conference meant to bring together leaders in open source project to talk about documentation for their community. That could simply be user, or both users and developers. Three of us went to attend the conference over the weekend, and then join the WordPress group in talking about the codex and how to make WordPress’ docs much better. Our group was organized by the ever lovely Siobhan, who has been an enormous help on our own docs.

The biggest part of the conference, for us at the least, was joining the WordPress group and helping shape the future of the codex. We had a lot of brainstorming, as well as good and hard conversations about things we like and dislike about the codex. What underlying systems would make it better, how to organize the content, update it, etc… We got through all of those chores with a 2 year roadmap and a plan to make WordPress documentation even better!

I know I walked away with some new friends and a further sense about the great open source community. We try to do as much as we can here within WooThemes, that we sometimes forget the bigger ecosystem we are a part of. I think through things like the Open Help conference, Word Camps, etc…, we continue to learn the value of giving back to what, at the core, makes WooThemes possible in the first place.

Anyone can do so as well, so checkout the Make WordPress site to find a place to get involved. 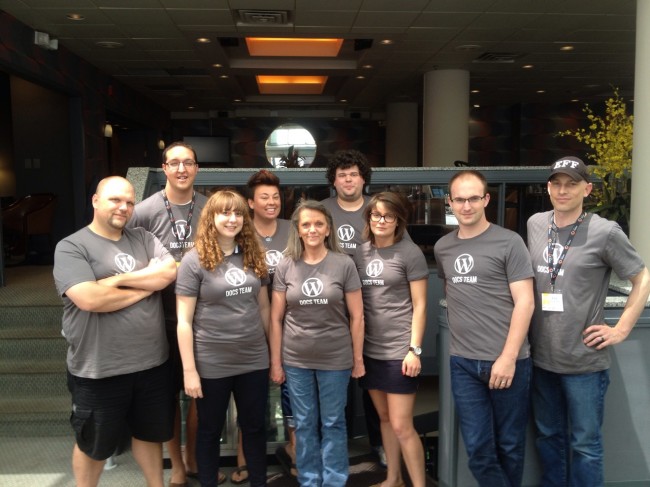 Squeezing in a last second graphic to brag on our team. We drilled down into the latest week of our stats and you can already see marked improvement in the numbers. We’re sharing this not only to show you that improvement is actually being made, but to keep ourselves accountable for July as well. We need to keep those types of numbers going!