For anyone who is unaware, there are conferences happening all around the world that are centered around WordPress. They are appropriately called WordCamps, though they aren’t what you may traditionally think of as a camp. They are, on average, 1 or 2 days long and have a range of attendees. There will be people there that are first time users and people who are developers making a living from WordPress. It’s a fantastic opportunity to learn, network, and get in some team bonding!

«WordCamp is a conference that focuses on everything WordPress.» 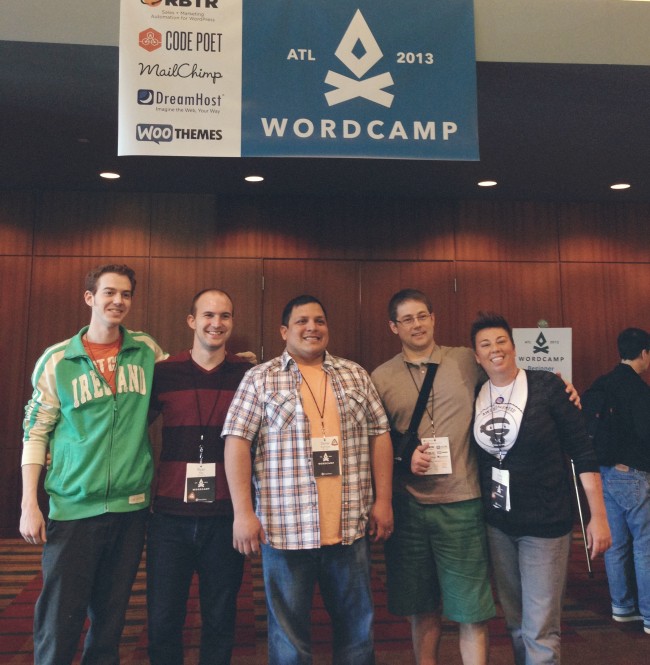 With that out of the way, most of the US WooThemes crew decided to get together in Atlanta this past weekend for WordCamp Atlanta 2013. It was a fairly central point for us to all meet up, plus WooThemes was a sponsor. We had Tom (New York), Mike K. (Ohio), Maria (Roaming in the RV), Daniel E. (Texas), and myself (Indiana) all get together to have a little fun and checkout a WordCamp. For a lot of us it was our first official WordCamp, I believe Tom was the only person who had gone to another WordCamp before.

It was great for us, a team that works remotely, to get together. It’s also the first time Daniel E. had met any of us outside of Skype, and vice versa for the rest of us. It’s hard to explain why it’s so awesome to get together, but things like this and our WooTrips are crucial to our culture here.

After we meet and get to hang out for awhile, we easily all become great friends. Enough so that we are close enough to give hugs when we say goodbye. I don’t know if most can say that about their co-workers. We’re a really close team!

Besides being able to get together, we were here to attend some informative sessions and meet lots of new people. WordCamp Atlanta went all out and had 4 tracks running at the same time. A beginner, content strategy, designer, and developer track all had sessions that anyone interested could learn from. Being in Atlanta we had quite a few WordPress rockstars in attendance as well. It was so fun to be able to meet people we all follow on Twitter, or interact with here for WooThemes, face to face.

Now if you think it sounds too nerdy for you, just know that my wife was in attendance as well and had a great time. She enjoyed many of the sessions from the content strategy track, as I’m sure many others did. So don’t have the mindset that a WordCamp will be too technical for you.

What We Took Away

First off, we need to get together more often. We all had physically met either for the first time, or just last October during our Cape Town WooTrip. It was great fun to get together again this past weekend, we will definitely keep a sharp eye out for another opportunity to do so!

Secondly, WordCamps are awesome! Like I said, this was the first WordCamp for a lot of us and we really enjoyed it. Kudos to the organizers of this years WordCamp Atlanta! Personally, part of my 2013 goals is to get further involved in the WordPress community. I don’t think a more perfect example exists than attending a WordCamp, so there will definitely be more WordCamps we all attend this year.

Speaking of that, before we get to session content, some of the people we got to meet and hang out with were the best. We all got to meet some of our WordPress heros like the 8bit crew, Brian Krogsgard who does lots of great stuff with WooCommerce, personal WooThemes fans like Kevin Gilbert, designer extraordinaire James Dalman, and many more. There is definitely plenty of truth to what people say about the WordPress community.

From the sessions I think we all learned a vast array of things. From further understanding how to use Git, overcoming our fear of the publish button, the power of telling a story, designing to make six figures, and the elusive Golden Unicorn! I would expect all of our own personal blogs will be updated more frequently than they have been before as well. We were all really inspired to take all of this and act on our intuitions to create awesome stuff. Whether that be great tutorial videos for our WooThemes products, successfully branching a theme to make a fix, or becoming a better developer in general!

We had a blast, so what WordCamp should we go to next? I’m ready for the next one. If you were at Atlanta or have ever been to a WordCamp let us know about it. If you’ve not yet make plans to go to one soon. All of us here in the US would love to meet more people from the WordPress or WooThemes community!