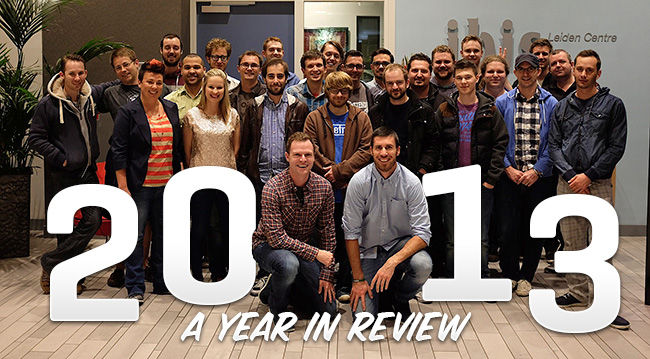 As we count down the hours to 2014 and most of the WooThemes team enjoy some much deserved time off, we reflect on a monumental year.

The year of growth

Our mission for 2013 was to double-down on the products & revenue channels where we saw most traction & growth and concentrate on creating long lasting relationships with our existing customers through our platform offering. With our flagship product WooCommerce gaining huge momentum it took us 629 days to reach 1 million downloads, and only 184 days to reach 2 million. Over 150,000 sites are now using WooCommerce to power their shopfronts and all data suggests we are one of the fastest growing eCommerce platforms online. Needless to say we found ourselves with a lot of new customers.

Whilst we place significant emphasis on WooCommerce in our growth strategy, the long tail has been very effective in driving and acquiring new customers. WooThemes has had a massive year in terms of theme and plugin releases. We’ve re-factored a lot of code and removed a lot of bloat from our themes – replacing in-built functionality with a heap of free plugins. We’ve optimised our site, both visually and technically. Powered by WooCommerce in 2013 there was just shy of 100,000 transactions processed on our site, and whilst we may not be the biggest store in terms of product numbers, we’re even more confident WooCommerce can power a shop of any size with the right hosting infrastructure.

With this kind of growth, we’ve experienced a year of much change in terms of organisational structures, new policies, stricter targets, deadlines, as well as increased and improved communication through product and support hangouts, p2 messaging and the implementation of Hipchat. The whole team now even has Fitbits and help encourage each other to step away from the computer and exercise – from the other side of the world.

When I asked the team what their highlights were of 2013 the common theme was our team get-togethers, namely the WooTrip, as well as WordCamp Atlanta where our stateside team met and WordCamp London were some of our UK team congregated. The long lasting effect these get-togethers have is immeasurable, but the relationships they help build between remote team mates is very tangible. We look forward to more meetups in 2014.

What the team had to say:

Everything about WooTrip 2013 was incredible as always. I’m really excited for the plans and strategies that were laid out this year to come to fruition in 2014. Our leadership is on key – Ryan Ray

WooCommerce 1M and 2M, WooTrip 2013 (the whole trip!), WooSlider growing up (2.0.0) and many more. Favourite theme of the year would have to go to Upstart – Matty Cohen

Definitely the growth of WC, hitting 1M and 2M downloads. WooTrip is always the highlight of the year, meeting everyone again (or for the first time) – Coen Jacobs

The moshpit at WCEurope – Magnus Jepson

Overall, WooThemes has matured as a business and overcome some big obstacles. We’re a constant work in progress, but have some very specific goals set for the new year that we are going to strive towards together. We look forward to sharing more with you our community soon.