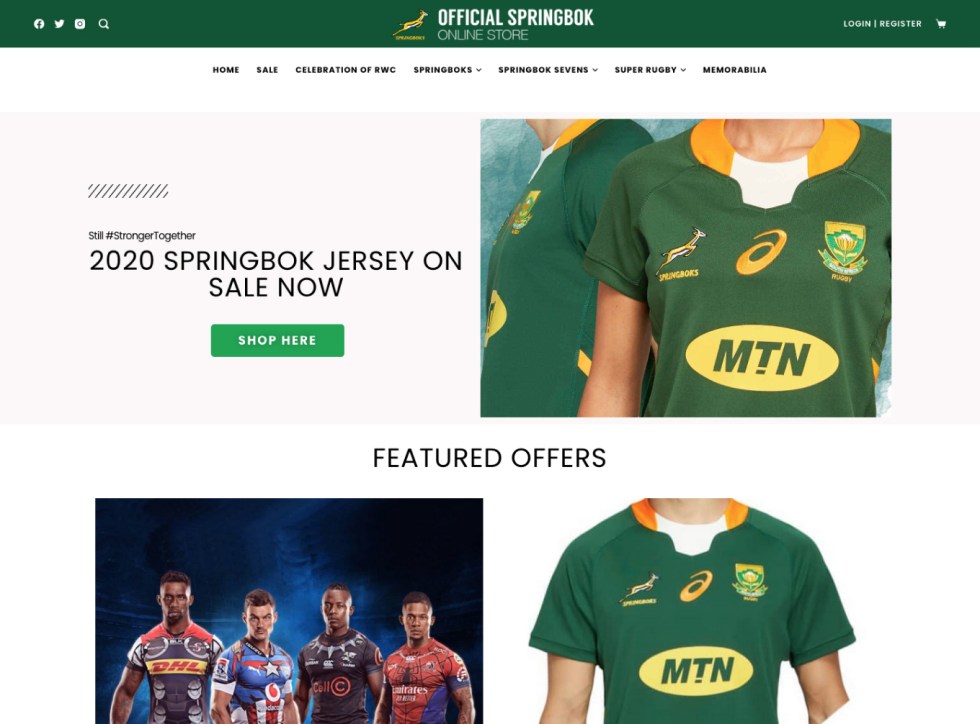 South African Rugby Shop is the official online store for the Springboks.

The South Africa national squad claimed the 2019 Rugby World Cup after crushing England 32-12, and the team proudly represents South Africa going back to its first international match in 1891.

Dovetailing on the team’s inspirational 2019 campaign, the Springbok online store provided die-hard fans across The Rainbow Nation with a plethora of products ranging from jerseys to hoodies to exclusive memorabilia. In a nod to classic characters like Black Panther and Spider-Man, it also sells limited-edition superhero jerseys for each of its four Super Rugby franchises.

With lost profits ranging from home ticket sales to concessions, the Springboks’ online store became essential to supplement revenue and enable fans to show their support.

The defending champions were preparing to flex their muscles when COVID-19 derailed the season, resulting in the postponement of matches across South Africa from March until September. Even when play resumed, spectators could not attend matches for health and safety reasons.

With lost profits ranging from home ticket sales to concessions, the Springboks’ online store became essential to supplement revenue and enable fans to show their support for Amabokoboko.

This South African rugby shop example is a perfect case of catering to rugby-hungry aficionados when the virus sidelined the squad for months on end, denying the Springboks a triumphant return to action in front of their fans

To maximize engagement and sales, the defending champs’ online shop leverages the power and customizability of WooCommerce. Fans around the globe can easily navigate among hundreds of items, with SA Rugby able to add new and sought-after products via an intuitive dashboard.

The three-time World Cup Champions boast a social media following approaching three million. With so many eyeballs focused on the pitch, the Springboks’ store is an ideal WooCommerce online rugby shop example of marrying a beautiful and user-friendly interface to maximize engagement, clicks, and purchases.

https://sarugbyshop.co.za
Get started with WooCommerce