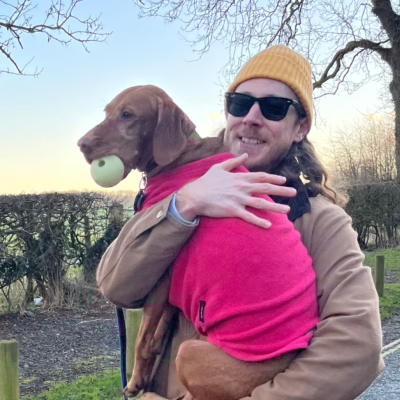 Last weekend WooThemes sponsored the annual WordCamp UK that was held in Edinburgh, Scotland. Myself, Mike and Coen attended and as expected, it was a great event. We met a bunch of cool people in a beautiful city, witnessed some inspiring talks and gathered some interesting ideas and feedback on all things WooCommerce. Read on to learn all about our Scottish adventure!

Mike and I spent 5 hours on Friday afternoon travelling up the country by train whilst Coen flew in from Holland, bringing with him some Dutch delicacies for us to try (Chocolate sprinkles for breakfast, anyone?).

The first evening traditionally includes a social event and 2012 was no different. After finding and checking in to our hotels (seriously, there are a lot of hills in Edinburgh) we chowed down on some Mexican food, said “Hi” to some fellow attendees before introducing Coen to a Scottish Pub. Although Mike and I live quite close to each other, it was our first time meeting Coen in person since he joined the team. It was a great opportunity for us to get to know each other properly and have a general chit chat about non-work related topics which is something we rarely have the time to do.

We didn’t drink any Whisky, but after a few ales we were soon discussing random things such as whether Scotland was a Country or part of Great Britain (or what?), and why Holland were so rubbish at Euro 2012.

Arriving at the venue on Saturday morning we set up our sponsors stand by arranging the freebies we’d taken along for the event. They didn’t last long. The ninjas and dunnys were the first to go, but I think the t-shirts would have disappeared faster if we’d actually taken more appropriate sizes (next year we’ll bring more M’s. Promise).

Saturdays talks were kicked off by Coen as he delivered his eCommerce focused talk; “the State of eCommerce and WordPress in 2012”, the slides of which can be found below;

There were some very positive comments about WooCommerce with many people impressed by the massive library of extensions we’ve managed to build in the last 9 months.

Afterwards we enjoyed a couple of great talks including;

We also spent a bunch of time at the Happiness Bar meeting current WooThemes/WooCommerce users as well as trying to create some new ones by handing out our 30% discount coupons.

Saturday evening brought with it the main social event. A basement bar full of WordPress nerds and free drinks for everyone. As you can imagine, a splendid time was had by all.

While we weren’t out all night, we were out late enough to make getting up at 8am the next day something of a struggle. Luckily our hotel provided the perfect cure to any hang-over – a full English (or in this case; Scottish) breakfast, complete with haggis. Whilst our continental friends were a little confused by this fried phenomenon at breakfast, it certainly helped me get through the day (along with plenty of cups of tea).

Sunday was a little more chilled out (most likely due to the late hour everyone got to sleep the night before) but was still packed full of interesting talks and meetings with folks we’d missed the day before.

Overall WordCamp UK 2012 was a great success, thanks to the fantastic organisation, the inspiring talks and even greater after parties.

We enjoyed many informative talks and witnessed some interesting debates on WordPress topics you don’t always consider such as wp-admin accessibility and ways we can give back to the WordPress community in general.

It’s always exciting and inspiring to be surrounded by so many people who are as passionate about WordPress as we are and I can’t wait for next years event.