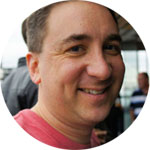 Hi,  I’m Mark Copeman. I’ve been working online for the last 4 years and I’m the founder of two businesses.  8:45TV video production and online training business and Customer Thermometer, a customer satisfaction survey tool. I’d class myself as an online entrepreneur of the most dangerous type. I know a little about design and a little about development and have been known to attempt a bit of both when needed. A little knowledge does have its uses though.

This case study is a little different to some of the others here on the blog. I wanted to describe the process I went through to deliver Customer Thermometer v2.0 from a founder / project manager’s perspective.

Back in September 2010 we designed and built a brand new WordPress theme, which at the time we thought would get across the messages we needed to deliver and would begin the process of converting visitors into customers.

We made a conscious decision to design and build a theme from scratch we wanted to look unique and not like other sites which appeared “out of the box”. In hindsight, it was the wrong decision. I’ll explain why later.

As you would expect, we spent a lot of time on the original site, from both a content and design perspective, with only a little understanding of conversion at the time. The theme was built from scratch and whilst it was OK, it wasn’t built using any form of framework and so things started to niggle when we wanted to keep things moving and changing. You realized there wasn’t functionality for something I’d become useful with a commercial theme or you’d realise that there wasn’t CSS support for a certain type of bullet you’d never used before.

From a designer’s perspective, there’s nothing worse than someone tinkering with a homepage or layout, we’ll just do this/we’ll just do that, and before you know it, it looks amateur. We were guilty as charged.

In July 2012 we made a decision to rebuild the site, based on extensive Google Analytics and PPC data. We now knew what was important to visitors and what wasn’t. We could see the number of tablet visitors rising and so we could now make some informed decisions about how to redesign the site and make it responsive too.

Having been a staunch Woo user over the last 3 years, building sites for my other business, I decided we needed to go back to basics and use a Woo Theme. Why? Because the framework is solid and because if it’s been designed, tested and used by experts, then surely it has to be a better starting point than a brand new design. Why reinvent the wheel?!

My approach might draw criticism, but this is how we moved the site forward:

Typically you’d decide on a sitemap and then design the site accordingly, however I wanted to fix a starting point and so re-engineered content and layout to fit the theme. For us it worked. For others, it might not.

We chose PixelPress, because we felt it would was a great theme to show off our application.

We learnt a lot from our research of other SaaS sites, cut down the amount of words we were using from the previous iteration and added a lot more imagery. The layout is big, bold and simple. We believe we get messages across faster â€“ because people don’t stay for long.

We decided to remove the sidebar layout. Providing lots of options and paths for visitors at first we thought was helpful. In hindsight, it was confusing. If you take control of visitor’s paths through your site, then you have a better chance of taking them through to conversion.
Instead, we’ve added a sticky top navigation, with minimal options to branch, but always available and relevant to visitors depending on the page they’re on. We see sticky nav becoming a trend in user experience going forwards and I suspect Woo will consider building it into themes as an option before long. They should do!

It’s early days, but the analytics and signups are showing that visitors are finding the new site much easier to navigate. We’ve had some great feedback from users too on the new site and as founders, we’re now proud of our shop window, as opposed to being slightly reticent about it – and you can’t put a value on that.

It’s time to switch on Optimise.ly, we’ve got a few slides now ready to test on the homepage, which was straight forward to integrate into the theme. We’ve also got to port our blog site over to the new theme too. All in all we’re delighted with the results and would recommend a WooTheme to a non-developer, non-designer like me, any day of the week.

Would you like to be featured on our blog? Share your experiences working with WordPress and our products and if we believe it will benefit our community we’ll publish it. Contact us.