Three things we hope you take away from WooConf 2017

A little over a week ago, I traveled to Seattle along with designers and developers, freelancers and agencies from across the wide world of Woo, for WooCommerce’s annual gathering at WooConf.

For me, it was the culmination of 10 months of work that started early in January, when I came on board to plan the content. From 15 Skype calls to chat about what different people wanted from a conference to two days of talks, demos, and workshops, I hope that together we delivered on what I heard our community ask for.

Read on for three things we hope those who joined us onsite or via the live stream took away from WooConf 2017.

#1: The Woo ecosystem is bigger than you’d expect

WooConf started with the State of the Woo from Todd Wilkens, Head Janitor for WooCommerce. Todd shared a few numbers that we’re accustomed to seeing – 32M WooCommerce downloads from WordPress.org, and 3M active installs.

Then he asked the room how much commerce we thought actually went through Woo stores. No one was close. 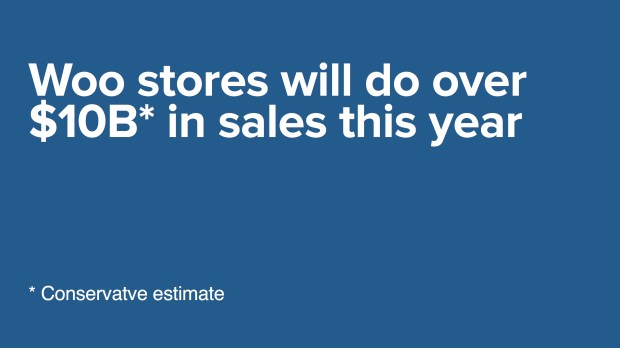 WooCommerce stores are estimated to bring in $10 billion in revenue – that’s larger than the GDP of the Bahamas. WP Tavern liked these numbers so much they had an article up in a matter of hours.

That amount of commerce is the result of a large amount of stores running on WooCommerce, and also bigger stores joining the open eCommerce world.

With a growing ecosystem, that puts scaling on everyone’s mind.

From my interviews I knew that people are concerned or curious about whether WooCommerce can scale and how far, so we had quite a few talks focusing on it.

How about a 5 millisecond page load for a #WooCommerce store? @zstepek and the @mindsizeme team have done it #wooconf pic.twitter.com/tQqZdoF1Wq

One of the keynotes came from Zack Stepek of Mindsize, who shared everything they’ve been doing to make WooCommerce run even faster.

I’m not going to lie – when Zach told me he was going to have not one but two live demos during his keynote talk, I nearly had a heart attack. I’ve done many live demos, and they always explode in grand fashion.

Well, lucky for us Zach is a class act and showed an amazing live demo – loading thousands of search results in milliseconds and showing us the new WooCommerce Order Tables project they plan to merge into WooCommerce core.

Excited to hear this talk about scaling #woocommerce from @coderkevin #WooConf pic.twitter.com/65EKtwHhDp

Kevin Killingsworth, one of the core developers, shared what the core team have been doing to scale WooCommerce core so that we can handle bigger and bigger stores (you know, in case you want to process more than five orders per second). He covered the pivotal importance of the CRUD (create read update & delete) and Data Store abstractions in core for performance and extensibility, and had live examples of both.

Of course, we also had related topics. David Lockie talked about enterprise eCommerce & Jimmy Rosén and Richard Sweeney spoke about scaling your site for international sales.

If you’re interested in WooCommece for enterprise, reach out to the folks at Woo.

#2: Customers are at the heart of great products

We started planning WooConf with customers – the WooCommerce community – at the heart of it all. That seems to have made for a stronger conference, and it’s something WooCommerce is pulling into their product offerings as well.

This year we decided to focus on developers specifically, though we’d had both store owner and developer tracks at previous WooConfs. We wanted to go deeper into the complexity of WooCommerce, and didn’t think we could do it justice by splitting our focus.

Our data shows that customers want to hear more from us on how to build great WooCommerce stores. Those are the types of posts we do best and are the kinds of questions we get asked the most; we wanted to be responsive to that need from the community and focus on the personas of “store builder” and “extension builder.”

It seems like we heard you correctly – 74% of attendees at WooConf build stores and 50% develop extensions.

Putting our community at the middle of it is also how I ended up on those 15 Skype calls: we wanted to hear from you before we even started planning the conference. It feels like that really paid off.

The same theme of knowing your customer and user research was taken up by Kandace Brigleb, partner at Needmore Designs, who talked about not only designing a site, but an experience. She focused heavily on design thinking. Design isn’t just a role on your team, it’s a mindset and it’s about building empathy with your user.

In his closing keynote John Maeda, head of inclusion and computational design at Automattic, hammered this home by again talking about understanding your users, and the value of freedom in your business.

Putting customers front and center is something we talked about from stage, and we tried to exemplify this throughout the conference.

For the very first time, we had a Product Research Lab led by Maria Scarpello. We opened up slots for attendees to sign up and talk to designers and developers working on WooCommerce – they could give feedback, explain their experiences and share their frustrations.

We sent out an email asking folks to sign up for the Lab about a week before WooConf, hoping to have about a quarter of the slots filled. To our surprise, every slot filled up. All told, 65 customers went through the lab with us, and we now have a lot of work ahead of us actioning the many wonderful suggestions that came through.

In future, if you’re interested in giving us feedback, please sign up for the Design Feedback Group.

#3: Community is at the heart of WooCommerce

A person I interviewed said:

WooConf should highlight how strong the community is

This became a thread that ran throughout WooConf, and almost every speaker said something about it – from Todd mentioning the 613 contributors to the WooCommerce plugin to Aviva Pinchas’ talk about the Woo Marketplace that highlighted some of the developers selling on WooCommerce.com and how they’ve solved problems for customers.

For me, one of the most impactful speakers was Beka Rice, talking about the power of open eCommerce. She talked about developing on the Shopify platform and the hoops she and her team had to jump through to replicate Product Add-Ons.

I found a bug in the platform […] I can help you optimize this if I had access to the code base – we’re a team of software developers. And I have to wait while they say “we’re going to look at this sometime soon”. And here I am left with no ability to fix that.

Another way we wanted to highlight the community was with our Golden Ticket competition, where we give one lucky Woo-er a free ticket, airfare and accommodation to WooConf for submitting a great site they had built with WooCommerce.

This year’s winner was Kevin Eulenberg, a front-end Developer, UX designer, and DJ from Hamburg, Germany.

Kevin had never spoken at a conference before, and it was a joy to have him join us and take part in the Woo community.

Of course, showcasing the community isn’t just about what happens on stage – it’s also getting to meet people throughout the conference’s two days, bumping into successful developers in line for coffee or sitting down with a core contributor at lunch.

We wanted to maximize these kinds of opportunities for serendipity, so we left lots of room between talks and offered a Laptop Lounge where attendees could gather together.

We also took the IRL WooConf community to our native habitat – we chatted in the WooCommerce Community Slack throughout the conference, and included the watch party attendees from across the world so that WooCommerce fans from all around the world could connect.

One of our goals with WooConf was to make it an event at which anyone would feel included and welcomed. We are fortunate to have some people within Automattic who have experience around how to make events more inclusive, and with their advice and backing we took a number of practical steps towards this.

Encouragingly, it seems to have had an impact:

While women are a minority at #WooConf, I've never felt more welcome and comfortable at a tech conf. The organizers created the right cues.

Our littlest girl, Addie, learning about #OpenSource #ecommerce from @Beka_Rice @WooConf 💚 how welcoming #WooConf has been. pic.twitter.com/gEsN5Bznqw

Next year: more and better.

If you didn’t make it to this year’s conference, we’ll have a series of blog posts over the next few weeks sharing some of the key points from the talks, and we’ve already uploaded the videos to the WooConf site.

Our eyes are already on the prize: WooConf 2018. We don’t have dates or a location yet, but if you’d like to stay informed, sign up to hear about it first.