Two weeks ago when we launched theWooNav we knew it was something special and would be well received by our users, together with our recent release of WooFramework V2 our theme development was certainly hotting up. Then, out of the blue, we were contacted by Jane Wells of the WordPress Core UX development team who was planning the final iterations of the menu management system’s core features for WordPress 3.0. Unknown to us Jane had been playing around with our WooNav functionality:

We have a developer working on it, and have gone through several rounds of community feedback and iteration, and it strikes me that what we’re probably going to end up with is a lot like what you guys have in your Custom Navigation option, so I thought I’d get in touch with you guys to talk about it

After a few emails it was pretty obvious that this made perfect sense for both us and the core team. It would save the WordPress developers hours of coding to build something that already existed and did the job well, and WooThemes would finally be acknowledged for it’s work in furthering WordPress theme development. 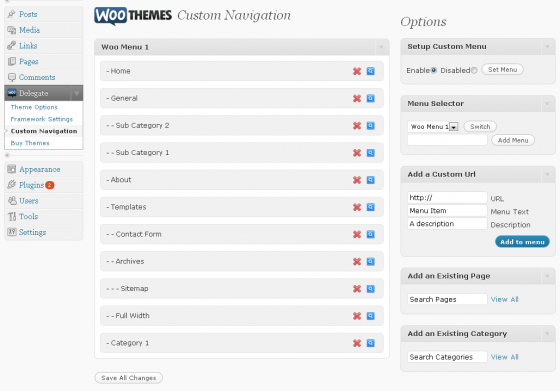 The WooNav in it’s existing state.

We are excited that we can give something substantial back to the core after a somewhat hesitant decision to GPL license our themes a few months ago. This proves to us, and hopefully others, how the GPL license should be correctly utilized to benefit others.

Kudos must be given out to Jeff Pearce, who was employed late last year by WooThemes and undertook the WooNav system as his first official development project for us. Not a bad first splash in the water we must say!

What excites us even more about this relationship with the WordPress core team is what Jane said to us in her email:

This year I’m hoping to work on ways to bring the commercial WP-based companies and core closer together, as opposed to what sometimes feels like a weird rivalry, so this would be a nice beginning for that

Jeff has already begun working with Ryan Boren (one of WordPress’ lead developers) on porting the WooNav into “patch form”, which will then in turn be submitted to the core of WordPress. Feature freeze for WordPress 3.0 is this week and we’re hoping to have ported the WooNav to the core ASAP, so that the community may start discussing the functionality, after which we will continue to work with the WP developers and the community on improving and finalizing the functionality for WP 3.0.

“Unfortunately” this impacts our users, since these developments mean we have to delay the integration & roll-out of the WooNav to all our themes. Whilst the implementation thereof will stay 99% the same, we don’t want to potentially duplicate work for ourselves and have decided to wrap-up the porting & development of the WooNav into core WP first, before integrating it with all of our themes.

You can however rest assured that by the time WordPress 3.0 hits your web browser, we’ll have included support for this amazing functionality in all of our themes. So this new awesomeness from the two W’s is not far off and all WooThemes will soon be able to enjoy it in all of its glory.