WooCommerce Group Coupons is an extension for WooCommerce, that allows to limit coupons by groups and roles. Automatically apply and restrict coupon validity for user groups. Offer exclusive, automatic and targeted discounts for your customers.

The extension is basically setup-free and provides default settings that suit most sites.

If you have not already installed the free Groups membership plugin, we recommend to install and activate it, as it allows to use the advanced coupon settings related to group memberships.

A new menu item WooCommerce > Group Coupons gives access to several options that can be adjusted: 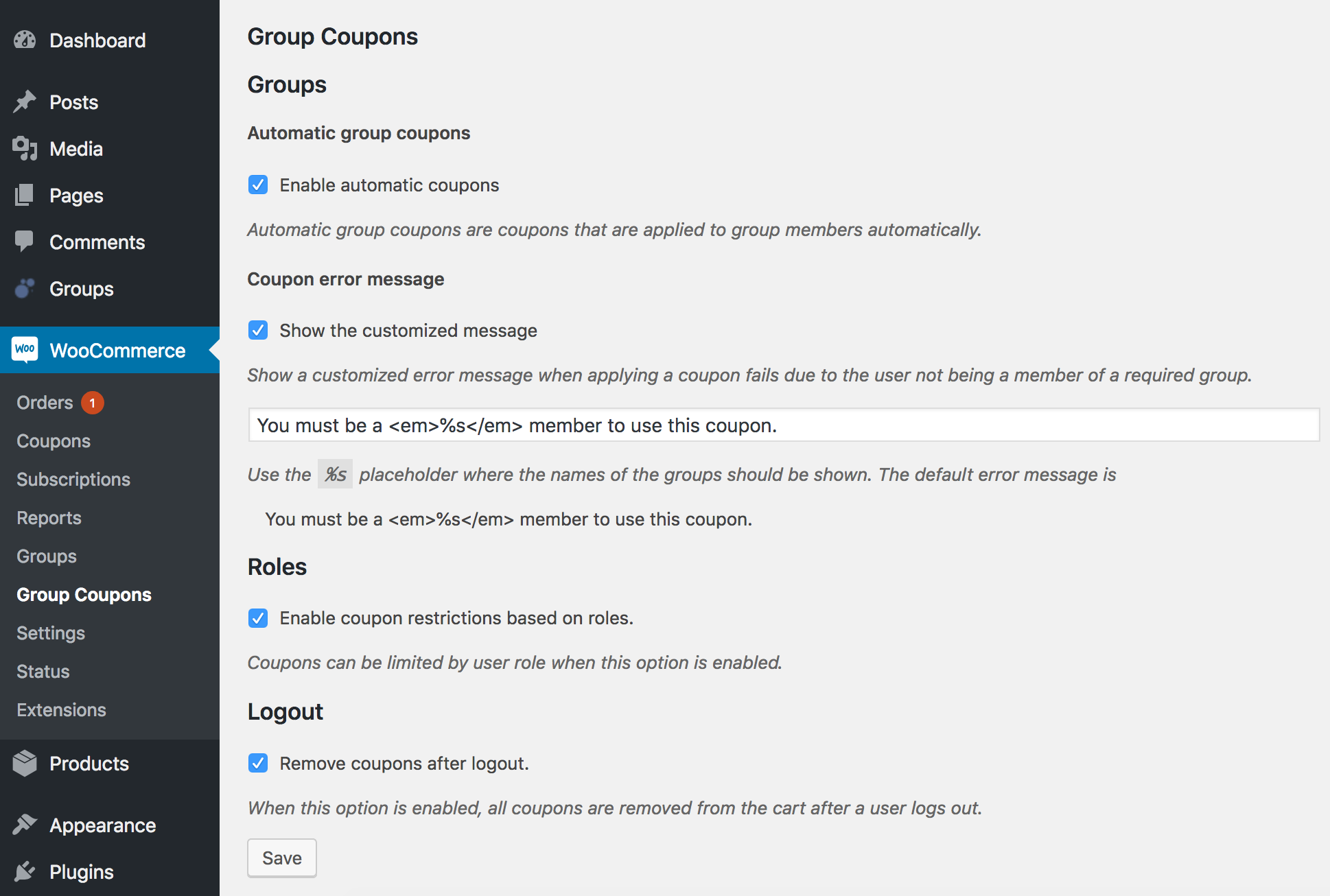 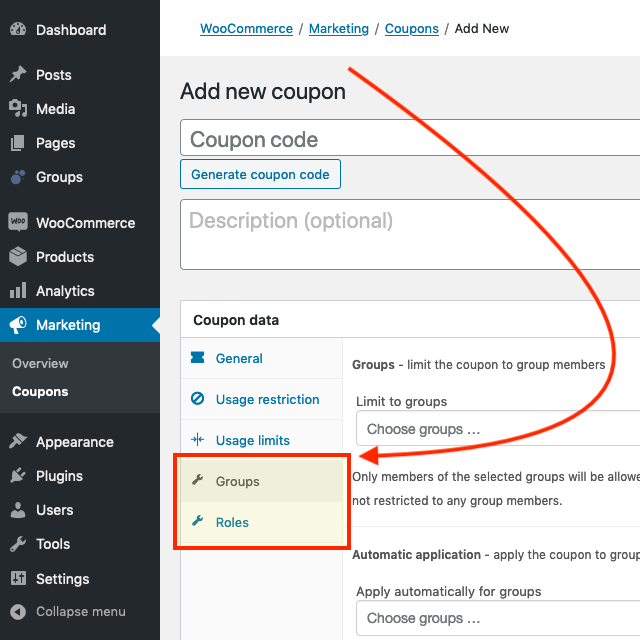 Once the plugin is installed and activated, coupons will show additional settings under Coupon data.

The second new subsection related to roles allows to limit the coupon to be used only by users that have one ore more roles.

The Groups subsection of the settings under Coupon data allows to limit the coupon to groups, apply it automatically to groups and to exclude certain groups from using it. You can access these sections when you add a new coupon or edit an existing coupon. 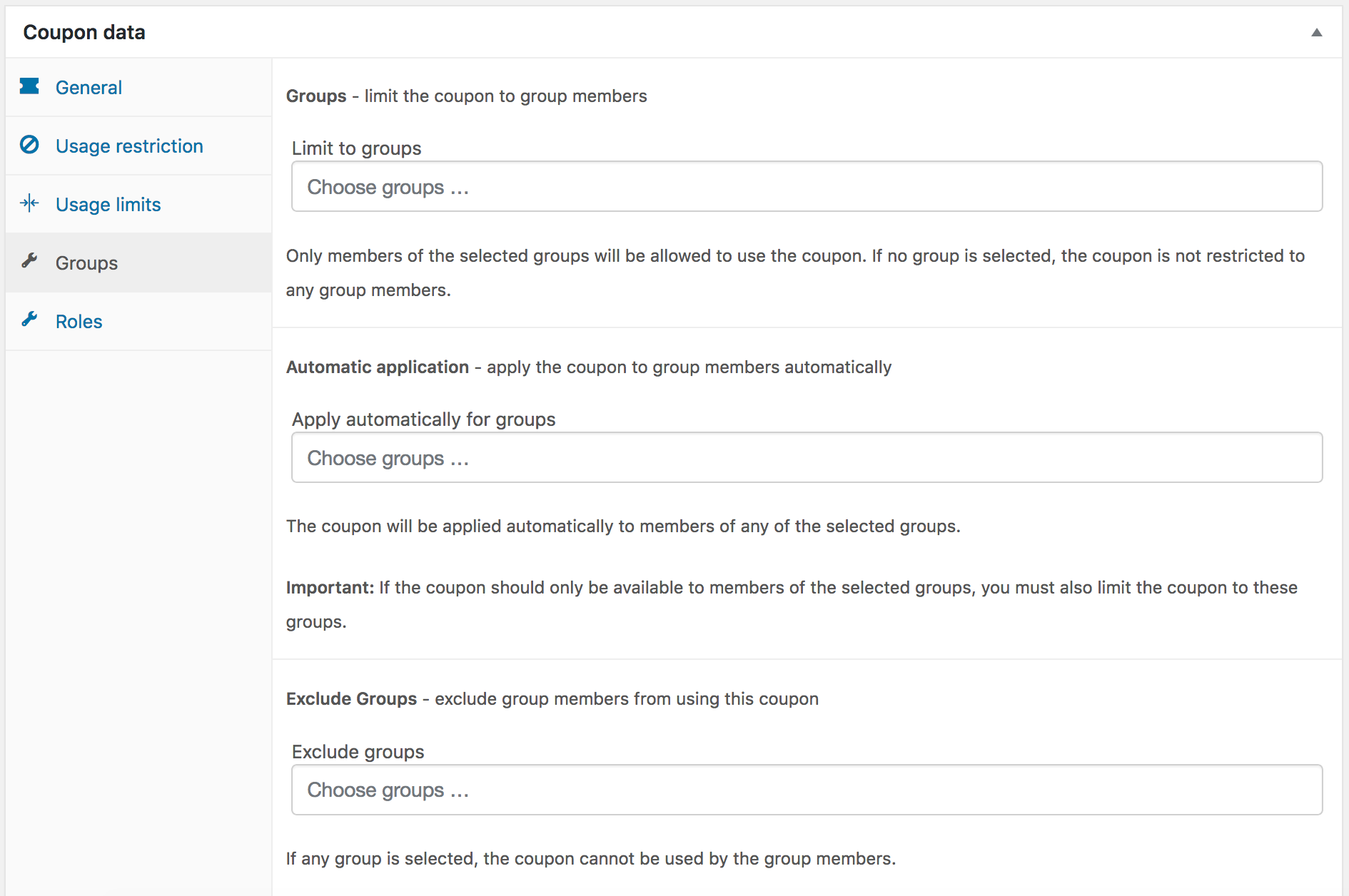 Only members of the selected groups will be allowed to use the coupon. If no group is selected, the coupon is not restricted to any group members.

The coupon will be applied automatically to members of any of the selected groups.

Members of the groups chosen here will not be allowed to use the coupon.

The Roles subsection of the settings under Coupon data allows to limit the coupon to certain roles. You can access this section when you add a new coupon or edit an existing coupon.

Roles – limit the coupon to roles

Users with the chosen roles will not be allowed to use the coupon.

The following examples illustrate some cases and configurations where a coupon is limited or applied automatically based on groups or roles.

If you are not familiar with the Groups membership plugin yet, we recommend to review its documentation pages where you can quickly learn how to create a group and assign users to it. In the following examples, we will be using several groups with intuitive names. Please note that the Registered group already exists when you install the Groups membership plugin and that all users belong to it. 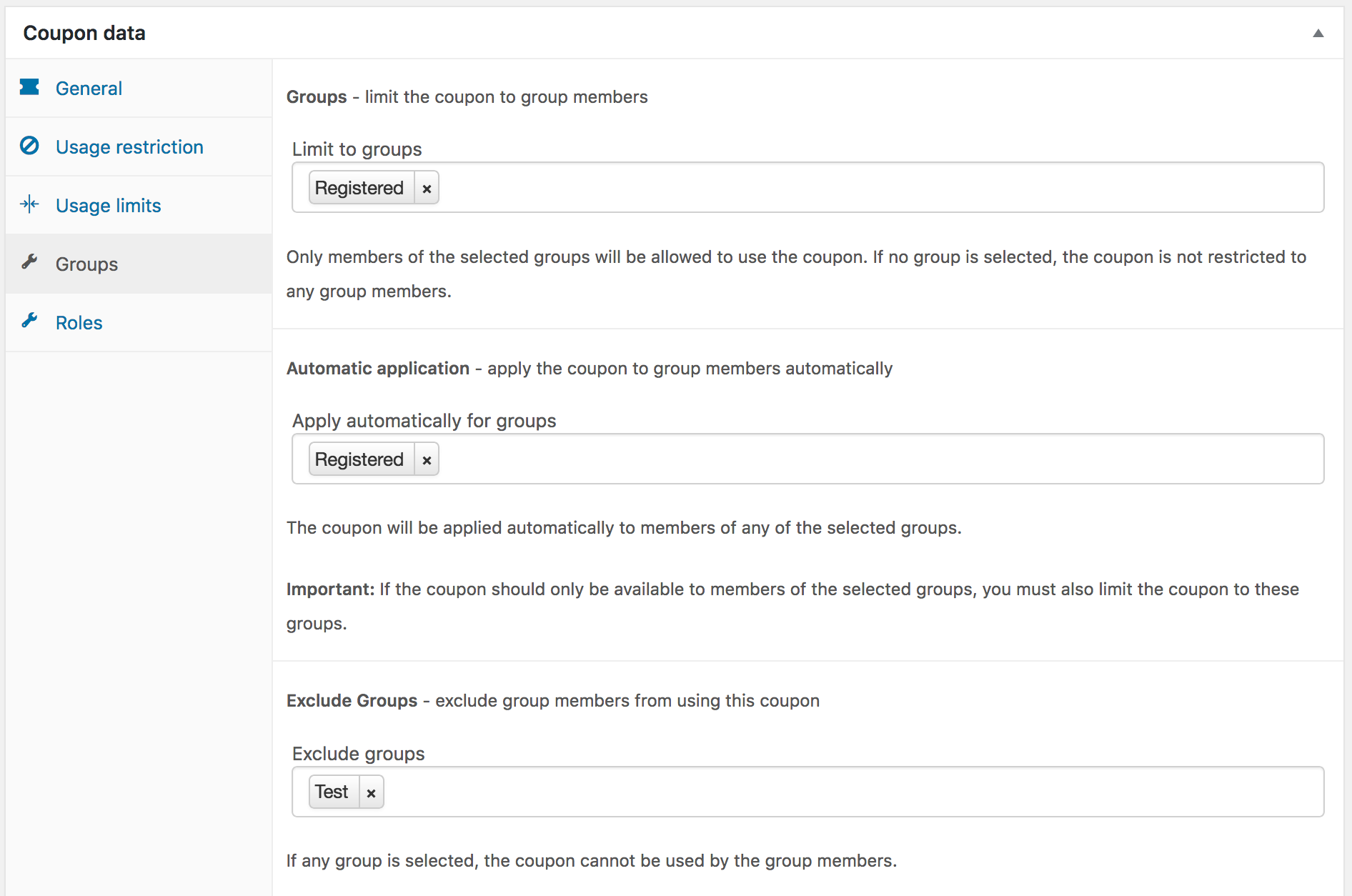 In this example you can see the settings used for a coupon that is limited and applied automatically for two distributor groups.

Here we have an example with settings for a coupon that is restricted to two groups, Level 1 and Level 2.

This example shows the settings used for a coupon that can only be used by those who have the Customer role.

The limiting groups, groups for which coupons are applied automatically and limiting roles are displayed in the Coupons section under WooCommerce > Coupons on your WordPress dashboard.

You might also be interested in using the free WooCommerce Coupon Shortcodes plugin which provides additional shortcodes that can be used with your coupons. It allows you to render coupon information and show content based on the validity of coupons.

To display pretty coupons, the [group_coupons] shortcode is used. 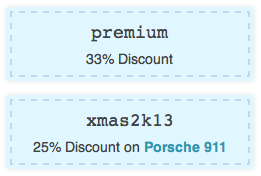 Use the shortcode by embedding it on a page where you want to show the coupons handled by the extension to your customers.

Coupons are displayed when valid (validity is based on the user account, coupon settings and the shortcode settings).

Default – The default version will display coupon codes that are valid based on the user’s group memberships and roles:

Only auto – To only display coupons that are applied automatically:

Only roles – To display coupons that are valid for the user based on roles only:

All group coupons – To display coupons that are valid for the user based on groups and roles: